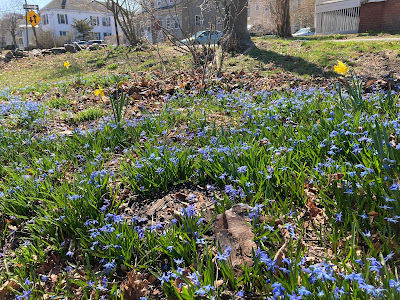 The Hill Country is awash with scylla--such a brilliant blue, and I love the woodland effect of the tree roots and rough mulch, in what is really just a narrow strip between two driveways. Yesterday was so beautiful: close to 70 degrees, with a dainty breeze, just enough to ruffle the hyacinth petals. After getting through my judging task, I transplanted some strawberry plants out of the herb bed, moved some crocuses so they wouldn't get mashed by future-deck construction, and then gathered some bits and pieces of vegetation for a wild salad--mostly dandelion greens and trout lilies, with a few sprigs of cultivated sorrel to fill it out--as the boys sat around in hammock and chairs and yikk-yakked about computer design programs and other stuff I don't care about . . . but that didn't matter: the sounds of their voices were a friendly lull, like the murmur of water.

This morning Tom is heading out early to take pictures at the World War II battery on Peaks Island, and I will sit here on the couch and finish banging out an essay for Teresa's poetry newsletter, and then I'll relapse into grocery shopping and housework. The temperature is supposed to be much cooler than it was yesterday--not rising out of the 40s--so I suppose it won't be terrible to be housebound by dusting and floor washing.

I've got a poem draft I'd like to work on, if I can find a minute.

But yesterday turned out to be more peaceable than I thought it would. After Tom drove Paul to work, the two of us played cribbage and drank beer in the late-day sunshine. And then he started a cooking fire, and I made a broccoli and wild-green salad, and he cooked sweet onions and hamburgers, and we brought them into the house and ate them on the couch while watching a Robert Altman movie, California Split, about 70s-era gamblers. Everything so familiar--those quilted vinyl bar stools and low-slung  cars and a general skim of grubbiness coating everything. Such a seedy decade to be a child in.