Woke up to drizzle, streetlight reflections, and our doughty little Christmas tree, shining sweetly in its corner. It is Wednesday, the last day of November, in the little northern city by the sea, and I am tucked into a cat-scratched couch corner in a shabby postwar budgeteer cape thinking about Dante and the arugula that is still thriving in my cold frame.

It will be a rainy-cloudy day, but not cold. I've got to prep for tonight's reading, and do my exercise class, and catch up on a few teaching tasks, but otherwise the day is mine. I want to work on poems and maybe take a first look at how the finished pieces might gather together into an embryo manuscript. It's way too early to be really thinking about order, but I'm interested in starting to notice what I've got.

I'm expecting a new editing project to arrive by the end of the week, and I'll be teaching on the next three Sundays, not to mention hitting the road again on Monday, so I'm very much enjoying these few quiet days. Yesterday I went for a long walk by myself, then rattled around the empty rooms, just pacing and pausing. I feel as if my mind may be preparing itself for a burst of something new, but I don't know what that will be, or how I will wrestle with it. All I can do is wander and wait.

Posted by Dawn Potter at 6:19 AM No comments:

Yesterday was housecleaning and giant laundry day, but I also managed to work on a poem, plus do my exercise class and go for a walk and even drive to South Portland to accomplish a small amount of Christmas shopping. This morning I'll focus on class plans, and some writing also, and undertake a bit more Christmas shopping, which as of now is almost done. It's been a low-key year, not one thing purchased online, not one thing costing more than $40. I'm feeling quite pleased with myself, given how much I hate shopping.

The poem I started over Thanksgiving has found its shape, and now I am paring it down, sliver by sliver.

Posted by Dawn Potter at 6:14 AM No comments:

Decorating for Christmas is not the event it was in Harmony. No trudging out into the back forty to choose a spindly funny-looker for the living room, no loud boys working to cram every single available ornament onto every single sagging bough. No, these days, it's just me at the grocery store, picking out a little guy and paying too much money for him; then setting him in a corner and dolling him up with a few sentimental ornaments while T eats lunch and lets me have my way.
As a result: voila: the traditional tree, topped with the paper Elvis Santa that Tom made for our very first tree together in 1986, scattered with early-1960s styrofoam gingerbread men from my parents' first tree, featuring famous ornaments such as Tin Foil Man (made by a co-worker's little boy in the early 1990s) and a rubber King Kong (T purchased it for me at the top of the Empire State Building in his courting days). 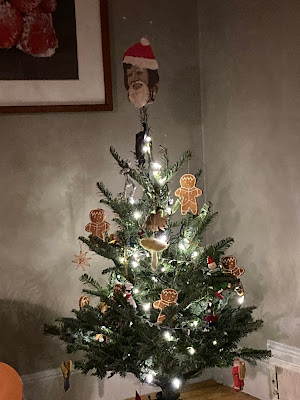 And on the mantle, the festive Holiday Rodents, and their pal, Wobbly Reindeer. 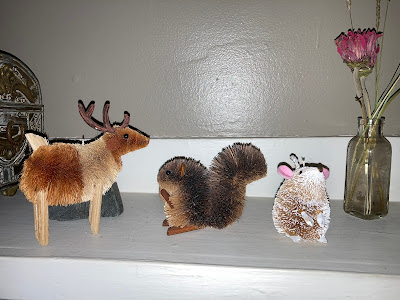 Across the street, the neighbors have strung lights along their fence and into their crabapple tree. And beyond, dangling from a giant maple, hangs the Orb, a ball of red and gold lights, which from the vantage of our front window, glows like a UFO against the the Congregational church's steeple. It's fine and silly display, and I am very fond of it.

And thus the Christmas season commences in the little northern city by the sea . . . a long rainy night, a shimmering Orb, and Elvis.

Posted by Dawn Potter at 6:10 AM No comments:

We got home just after sunset: unpacked, lit a fire, opened some beers, sat down to play cards, talked about what to make for dinner . . . we had a passel of leftovers from Tom's mother that we decided to turn into hash; we gobbled down our hash, we did dishes, we watched a couple of episodes of Peter Gunn, we fell asleep hard . . . This is all to say that the two of us, and the cat, were glad to be puttering around in our little house again--though the holiday was cheerful and talkative and sweet, and the family was a delight, and nothing could have gone better except to have even more of us on the spot.

Today I think Tom's going to work on the barn before the rain starts, and I'm going to try to catch up on laundry and groceries, but for now we are still lolling around in a post-holiday torpor, enjoying the fruits of the brand-new coffee grinder. The furnace is growling, the lamps are gleaming: Alcott House is cozy and shabby and friendly: a little island on a lake, a painted door into a tree trunk, a badger's burrow in a snowy forest.

Yesterday morning, after I finished my post to you, I opened my notebook and began transcribing a few scribbles. And suddenly I was down the rabbit hole . . .

An hour later I surfaced to discover that I was putting together shards from multiple scribblings into a longish piece about poetic craft and concern. At the moment the poem as a whole is called "Desk Work," and each section is a metaphorical response to an abstraction: "Conscience," "Ruthlessness," "Accident," and so on. I had no idea of writing such a poem, no plan to combine these scraps into new form, and yet here I am, with a project bubbling into life. The brain is such a crazy, amazing beast.

The rest of the day was fairly quiet--a small venture out to the stores, reading, some games of cribbage, lots of conversation, and then dinner out with the family. And meanwhile the new poem clattered around in my head, pitching and rolling like a baby in a basket.

I write to you from a quiet kitchen in western Massachusetts. Outside, a flat sky is just beginning to lighten. Nothing looks like itself. The pine grove is a cluster of silhouettes against pale paper, the house is a tidy construction of matchsticks, the kitchen is a rowboat in a still lake.

As usual, I am the only one awake. The refrigerator hums and bring me back to myself. The rowboat dissolves into fog. The matchsticks wriggle and disappear. Only the sky-paper remains, curling over a bowl of earth.

Yesterday was a flurry--hours upon hours of juggling one complicated recipe against another. My mother-in-law took charge of the turkey, but between and 1 and 7 p.m. I made potato, cauliflower, and fontina gratin; wild rice and cranberry stuffing; giblet gravy; the innards of the apple galette; herb butter for green beans; and probably something else I have forgotten. Always I show up with no idea of her menu. It's like the Thanksgiving version of the British Bake Off's technical challenge: six hours to make a holiday meal for eight people, without knowing what I'm getting into.

But we did it, without significant mishap. The meal was enjoyed, card games were played, and I collapsed into bed afterward feeling like I'd run a marathon.

Today will be much more sedate. I hope to get outside for a walk up to the reservoir, though rain is forecast, so that idea may not work out so well. I do need to venture out to the stores to buy a coffee grinder, to replace the one that self-destructed yesterday morning as I was making breakfast in Portland. [You may be interested to know that I just mistyped Portland as Poetland.]

I brought along Alice Munro's short stories to read; also Betsy Sholl's new poetry collection. I brought along my notebook of draft-blurts, in case I have a chance to tinker with any of them. We'll see. Possibly all I'll do is make more coffee and stare out the window. That will be okay too.

Posted by Dawn Potter at 7:22 AM No comments:

Recently a bookstore opened in my neighborhood, the first I've seen in this part of town. I, of course, was thrilled: a bookstore within walking distance of my house! Being from up north, of course, I immediately began to worry that it would limp along till Christmas and then close because of lack of interest. That is the pattern in the northcountry towns: open a [bookstore/organic grocery/restaurant that serves vegetables], and wait for it to fold. But yesterday, when I walked into Back Cove Books, the place was hopping. People browsing among the shelves, readers filling the chairs, little children bouncing on the front steps, customers in line to buy books. I had been there once before, and now the owner called out to me, "We have your collection in stock now!" and I felt all pleased and blushy. Women were standing around chatting about "my favorite Alexander Chee novel" and "I studied under so-and-so in grad school" and "have you met my friend the agent?" and I was like, what is this world? Have I accidentally teleported to Brooklyn?

Anyway, I did my neighborly/authorly duty and bought a stack of books for Christmas gifts, and I took the car to a car wash and removed Tuesday's Wellington snow-dirt, and I vacuumed out the interior and wiped down the dust and generally made the car look decent again, and I drove to the fish market and bought smoked fish for Thanksgiving appetizers and salmon for our dinner, and thus passed my Wednesday at home.

This morning we'll slowly pull ourselves together and then we'll head south for family time in a nice clean car with new tires. I hope all of you are looking forward to a good day and a manageable load of dirty dishes. I hope the Bills beat the Lions in a game I will not have a chance to watch. I hope my sons are enjoying some sort of strange Thanksgiving food they've never been served before. I hope no pets get sick on turkey and throw up on the rug.