I got a lot done yesterday, homestead-wise. First, I started the pot of green tomatoes: cutting them into chunks, adding a rough-cut onion, a couple of peppers, a head of garlic, and a teaspoon of cumin seed, and letting them cook down for most of the the day. Later I ran the softened stew through a food mill, added a tablespoon of salt and a teaspoon of sugar and a good shake of chipotle and ancho ground peppers, and let the sauce simmer till it had slightly thickened.
In the several-hour meantime, I prepped garden beds and transplanted broccoli and a few kale plants, tore out the green beans and cosmos and some of the nasturtiums, and lugged my big summer begonia and coleus planter into the house. It's such a handsome display that I'm hoping to keep it alive a bit longer-- 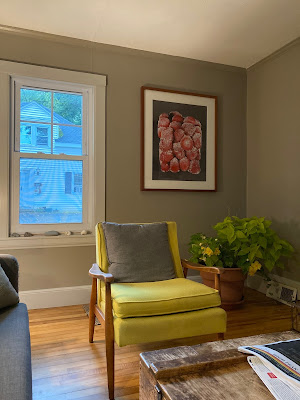 And then I spent the rest of the afternoon in the kitchen: freezing peppers, working on the green sauce, poaching pears, and eventually listening to the most stressful baseball game of the year . . . oh my word, those Red Sox are going to kill me with their dithering . . . do they or do they not want to win games?
We ate enchiladas for dinner, corn tortillas filled with leftover chili I'd made earlier in the week, topped with grated cheddar and some of the new green sauce and then baked. I put together a salad from a fantastic watermelon that my dad grew. We ate the poached pears topped with their own syrup.
It did not, on the surface, seem much like a writer's day, and yet throughout I had the peculiar and familiar tingling awareness that I was watching--maybe what I mean is absorbing, but the sensation is so much of being two selves: the self who is physically engaged in a task and the self who is observing, synthesizing, feeling, judging, explaining, describing, framing the situation . . . None of those words is exactly accurate because in the moment they overlap and tangle in the awareness of that watching self.
I've had this perception of my two selves ever since childhood: riding a bike and watching myself ride a bike; playing the violin and watching myself playing the violin; crying and watching myself crying. Of course I don't live every second of my life with this split, but it appears often, and under circumstances of pleasure and misery, boredom and engagement. Maybe everyone does this, but I've come to realize that, for me, the split is in fact part of my writing life. It's how I gain information and awareness, how I begin to suss out motivation and connection, well before I ever put word to paper, or even have the awareness of the pressure to write.
I may or may not compose a poem that has anything to do with today's humdrum homestead tasks. But I did know that my selves were at work, and that is something in itself.
Posted by Dawn Potter at 7:19 AM