Yesterday did, in fact, turn out to be the reading and writing day I'd hoped for. After a quick visit from some northcountry friends who'd just dropped their daughter off at college, I sank into several hours of self-absorbed reading (alternating among Richard Wright's poems, a Tessa Hadley novel, and Susan Matt's Homesickness: An American History) plus scrawled out seven stanzas of a poem draft. By mid-afternoon regular life had kicked back in--Tom came home from work early and I had a Zoom meeting and something is wrong with the power steering in the truck and one of the wired-in smoke detectors temporarily started making a strange noise--but for a few brief shining hours I was a poet at work.
The terrible weather has broken, thank God. The morning is cool and dry, and in an hour or so I'll gird on my gardening pruners and head outside to cheer up the bedraggled flowerbeds . . . though this fellow is already feeling pretty good. 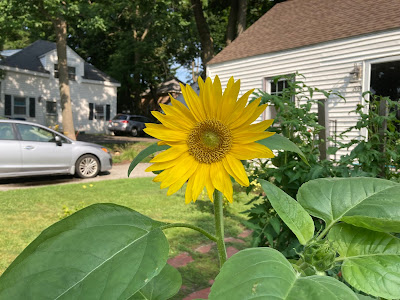 This is what we had for dinner last night: from top to bottom, fried Japanese eggplant, blackened shishito peppers, steamed green beans, slices of red and yellow tomatoes alternating with slices of fresh mozzarella and topped with basil and olive oil, roasted baby potatoes with parsley. Not shown: homemade coffee ice cream. A high summer feast. 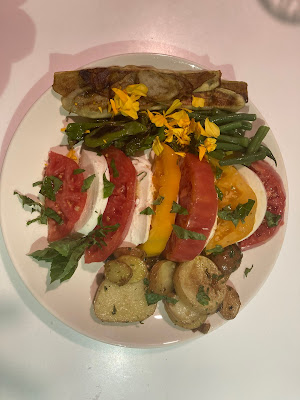 From Matt's Homesickness: An American History:

After the [Civil War], the idea that homesickness might be fatal continued to circulate among laypeople and physicians alike. Native-born Americans flocked from farms to cities, and European and Asian immigrants streamed into the United States, and these migrations inspired prolific commentary on homesickness and nostalgia. As the nation's racial and ethnic diversity increased, many observers claimed they saw patterns among homesick populations and suggested that nostalgia was a condition to which particular groups were especially susceptible. For instance, psychologists and social commentators influenced by Darwinian theory hypothesized that the groups least able to conquer their homesickness were the least culturally advanced. Those who succumbed to it were unfit for life in modern American society, for they lacked the prized characteristic of adaptability. . . . According to this view, those unable to adapt to a new environment and stricken with nostalgia were doomed to fail in life and business, perhaps even to perish. Observers maintained that a variety of different ethnic groups as well as African Americans, Native Americans, and women of all races were unsuited to movement and independence because of their alleged vulnerability to homesickness. Homesickness gradually became a marker of dependence and inadequacy.

ON your recommendation, I am reading this too. What a remarkable book. Thank you.

I think Richard S is reading it too. We'll have to compare notes--