The garden is glorying in the rain. We had drizzle yesterday and it's raining again this morning--not hard, but enough to let roots relax and fruit ripen. Carefully I dug around the edges of my potato bags and found these beauties: our first new potatoes since leaving Harmony. 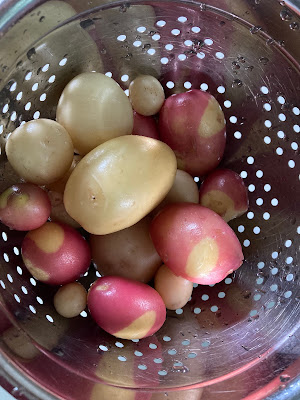 Even the bean plants, half-eaten by the groundhog, are starting to produce a few beans on their puny vines. 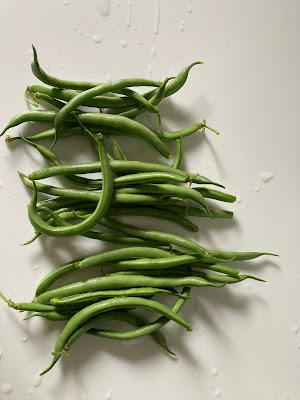 Yesterday was a really good poet-day for me. First, I got an email from Teresa, regarding the poem draft I'd created from the prompts in her workshop, which said, among other things: "I read the revision . . . all I could say for a few minutes was 'Holy shit . . . holy shit . . . '" Then, later in the day, when I called Kerrin about some Frost Place matters, she interrupted me to say, "First, I just got to say those Accident Sonnets you read at the conference were fucking amazing."

Two things here: (1) my poet friends have salty vocabularies when excited; and (2) I'm allowing myself, with some shame, to publicly declare that it's a good thing to be proud of myself; to be really, really happy that two poets I admire think I'm making poems that work; to dance a little imaginary jig about their praise.

I was writing to another friend yesterday, a friend who is a skilled poet but who has no faith in himself, about how he needs to hear praise and accept and revel in his gifts. So I want to walk the walk here, in his honor, because 99 percent of the time I hear nothing about my poems. I live in a world, like most of us do, in which poems are embarrassing public baggage.

But yesterday two of my beloved peers told me I was doing great work. I'm going to hug those words to my heart.

The thing is: when I get the gift of this kind of love, I know it makes me a better writer, just as genuine, careful critiques do. Because praise from people I trust and honor makes me want to figure out how to do even better . . . etch the poems even more deeply into the plate . . . tinker and tweak and experiment and rewrite and keep trying and trying and trying . . .

Yes, indeed!
Sometimes the silence says more than it means.

Love your sentence: "Sometimes the silence says more than it means." That's exactly the case.