For years I've been drawing cartoon birthday cards for my nephews: they love the silliness, and I love making something special for them. So this Christmas they get fancy versions: actual small comic books.

Making them is fun. I am by no means an artist, but I can rough-sketch and I can tell a silly story, which are good-enough skills for the project. My hero is Cat of Action, and I have just finished inking in the tale of his adventures in space, on the Yarn Planet, where he was hit on the head with a radioactive tuna, became tangled up in yarn, and plummeted to Earth. The next episode will take up his fight against his nemesis (Bluejay) as well as reveal his undercover persona (Construction Cat). It's all very dumb but I am trying to maintain a Flash Gordon sensibility and am including plenty of inside jokes about my own cat, which my anthropomorphizing family will appreciate. 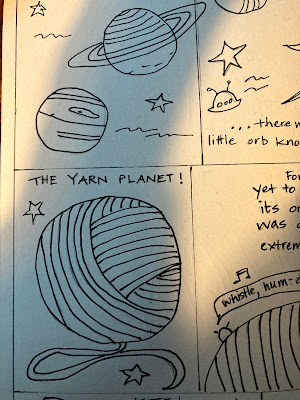 Today I'll be coloring in the book and maybe getting started on the next one. Tom has offered to print off a handful of copies so that I can share them with the whole family. A ridiculous Christmas present; but given the year we've had, why not make people giggle?

I think it's a delightful idea!!
Maybe even have him print them before they are colored, so people have a coloring book? =)

Enjoy--fun, silly things are the best gifts this year, I think.