Anyone who has spent time trying to text me knows all about the long saga of Dawn's Terrible Phone--an ancient device that barely texts, supports almost no apps, refuses to load maps, freezes whenever I try to scroll, etc., etc. I can make calls (usually) and receive emails (usually), but otherwise the phone refuses to comply. I hate phones and don't want to spend money on them, so it's big news that, this weekend, I put in an order for a new (by which I mean refurbished) phone . . . in bright red, because for some reason that model was $25 cheaper than the other. I tell you, things will be modern around here when the Red Phone arrives.

And that wasn't the only grown-up purchase this weekend: Tom and I actually bought furniture! . . . a set of six early-1950s steel and bent wood dining-room chairs that Tom spotted on Craigslist and became misty over. After he hemmed and hawed a bit about whether or not he should give in to his crush, we drove down to Ogunquit yesterday afternoon to try them out, and now we have these: 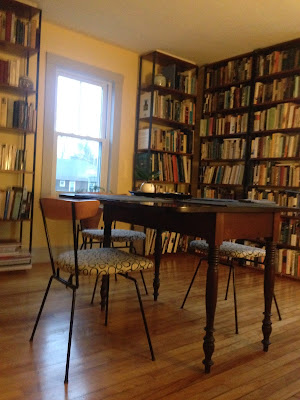 They are almost the same age as our house, and it's such a novelty to have real dining-room chairs instead of the plastic kitchen chairs we bought two decades ago in Harmony, our solution for something little boys couldn't stain or break.

So it was an activity-filled weekend, what with our beach date, and the two trees cut down (the back garden now looks like a mini-logyard, with a teeny brush pile and a teeny tree-length pile), and the chair shopping, and the phone ordering. I did zero housework, but that's okay: it's pouring rain outside now, and I am not sorry to spend some of it dusting and mopping.