If you read yesterday's postscript, you know that things did not go as planned. Paul's trip ended early after a thwart broke on the canoe. The morning was calm enough so that the boys were able to get back to the landing, but they knew better than to take the risk of paddling in rough conditions with an unstable boat.
So back they came, and I'm glad they were smart, though everyone is disappointed. Still, Paul was cheerful, and Tom and I were cheerful, and we spent a pleasant-enough evening together eating sausage-and-peppers and watching endless sports on TV.
I did get my bulbs planted yesterday: garlic in the Terrace Bed; tulips and daffodils in the Hill Country; crocuses in the Garment District; daffodils along the back fence lines. And Tom worked steadily on the new walkway in the Shed Patch, until he ran out of sand. Next weekend he'll lay the final two stones and spread gravel, install metal edging on the right side (a deck will eventually be on the left, replacing those temporary stairs and wrapping around the back of the house), and then I'll start preparing the soil for a new garden bed--which will be mostly ferns, I think.
I so enjoy watching Tom work. He is precise and quiet, a problem-solver, skilled and smart, with a sharp eye and instinct, and he is very strong, despite his small frame. He is why we can live like we do--on relatively little money, in places that require much upkeep and restoration.
No worries about that canoe thwart. He can fix it.
Today: some early morning editing, and then the housework and groceries I didn't take care of yesterday, and then I'll start throwing firewood through the basement hatch. There's a new load of green wood arriving in a couple of weeks, so I have to get a move on with the old. 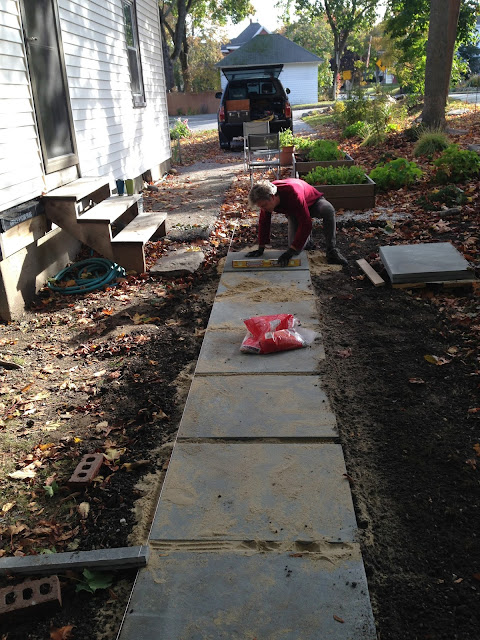