I took myself in hand yesterday. As that Trump-brother dream made clear, the world has been too much with me, and I needed a shake-up. So I spent the morning doing yoga, then working steadily on a poem form I'd never used before (the dizain: a strange 15th-century French form that doesn't sound that good in English but is useful insofar as it interrupts my rhythm-rhyme expectations), and then undertook a large yard renovation.

Part of my front garden wraps around the eastern side of the house. A previous owner created a terrace, but it stops abruptly, and the rest of that area has been a kind of no-man's land between the back yard and the front: dry dirt, thin weeds, a small useless slope tucked against my neighbor's lilac. Twice I've tried to plant it with myrtle, but the soil is so compacted that nothing thrives. Even the weeds are sparse.

So yesterday I began by building a small retaining wall along the property line, using various stones I'd  turned up in other digging projects. Then I laid plain newsprint down as weed suppression, and on top of that I poured six or seven wheelbarrow loads of the rough compost I made from last year's garden detritus. Then I made a small path with a few saved slates. And now the dead zone is ready for planting.

The area gets a lot of morning sun and some dappled afternoon light. So this afternoon I'm going to transplant ever-bearing strawberries along the path, move some of my larger herb plants to stand along the fence and terrace blocks, and plant sedum along the new retaining wall. This will ease up space in my garden proper and, I hope, give us a viable strawberry crop instead of just a handful now and again. 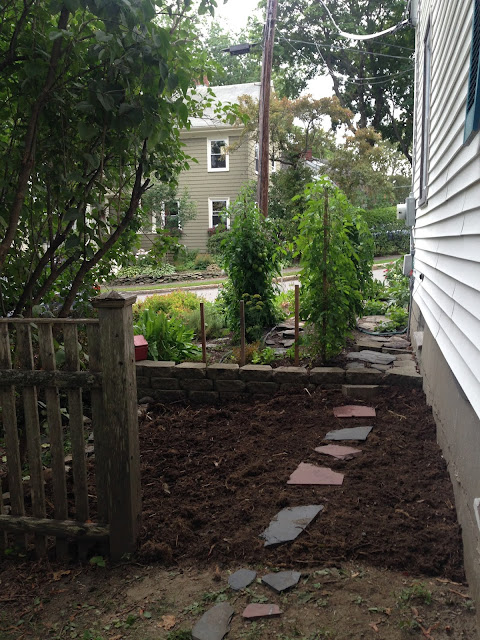 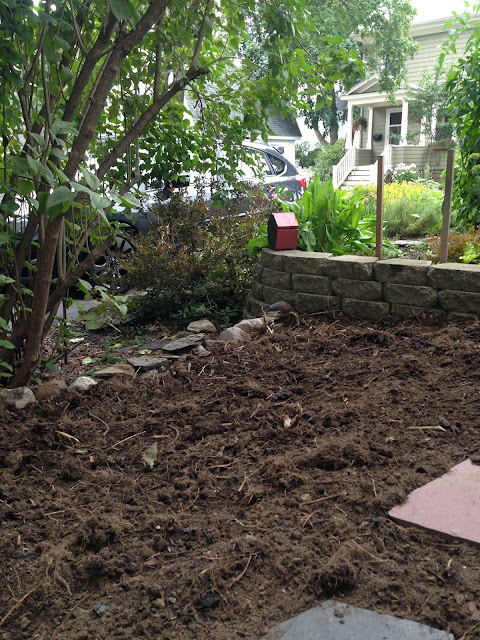 I worked hard, and was sweaty and filthy from all that stone and soil moving. But I feel considerably refreshed.

I admire your easy way of having a vision for your small spaces. I have a struggling spot myself, and maybe I can ponder on it a little. Work like that brings joy, and that's one thing we all have need of, I suspect.

The rain woke me up this morning. Beautiful, lovely rain on the roof. Hope you get it too!