I'm feeling somewhat groggy and ditzy this morning--a heavy, late sleep after wakefulness, and the coffee hasn't yet begun its stabilizing work.

I think yesterday's class went well. We had 11 participants, most with more fervent knowledge of the Odyssey than I have, so that was great. They seemed to love talking with one another, burrowing into the tale and its implications, comparing translations; it was exciting to watch their excitement, and the writing they've generated from those conversations has been stellar. Today's we'll do a little more reading and writing, and then we'll spend the rest of the session thinking about possible directions for their first drafts. My biggest takeaway is, that this dense conversation about an ancient poem is leading directly into strong new writing, and that has been my hope and my goal.

After I finished the session, and finished lying on the couch letting my eyes recover from the Zoom screen,  I put together the quince tarte tatin and baked it . . . this involved making caramel in a cast-iron pan, then spreading cooled poached quinces over it, laying a circle of frozen pastry over that, and baking it for a half hour or so. Then Tom helped me flip the pan onto a plate, so that the crust was now on the bottom and the caramelized quinces were on top. I was pretty pleased with how it came out, and the quinces have a subtle and mysterious flavor, sort of pear-like, but more perfumed. This is not a good photo, and Tom didn't use the plate I would have chosen for display, but at least you have an idea of what it looks like. The small dark fruits are dried cranberries. 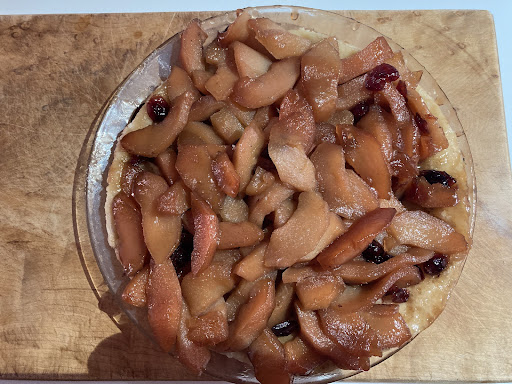 Sorry to have missed this class....timing. I LOVE quinces. My Mom made quarts of Quince jelly. Peeling all those isa massive chore, but the results is worth. I currently have the last jar of Quince ginger jam made by a dear friend sadly departed and sorely missed.
Have a splendiferous day and hellos to all.