Woke up at 4 a.m. with the sudden recollection that I'd made an appointment two weeks ago to get my car inspected and then forgot to bring it into the garage. Ugh. Not excellent timing for this discovery, as September is around the corner and Tom's truck is on the fritz, but at least I finally remembered.

Anyway, how's your first-thing-in-the-morning? Other than my dumb automotive lightbulb moment, it was a pleasant night--cool enough to shut the downstairs windows for the first time in months, I didn't have to run a fan in the bedroom, and the cat slept in till 4, which in his world counts for wallowing in bed.

Yesterday, for me, was mostly a kitchen day; for Tom, it was mostly a deal-with-the-broken-stuff day. I  picked a dishpan of peppers and froze most of them, except for the poblanos, which I saved to serve with fish tacos. 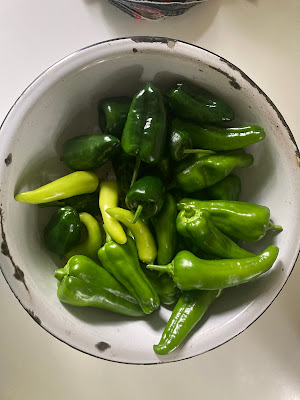 And I simmered a stockpot of tomatoes into sauce, and I baked two loaves of Italian bread. 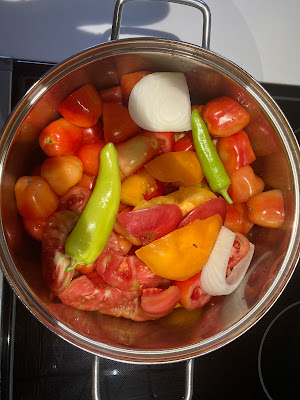 Today I've got to run errands as Tom will be taking my car to work this week. We're hoping he can get someone to fix his truck pronto, as he's supposed to be driving Paul's stuff to Brooklyn next Saturday, but one never knows with garages.