A busy day: laundry, then doctor's appointment, then UPS store to mail James's birthday presents (fruits of the Park Slope thrift stores), then editing, then grass mowing, then dinner prep, then picking up Paul at the bus station . . .

I guess this evening we'll start to figure out the next moves in the "get Paul to NYC" game. 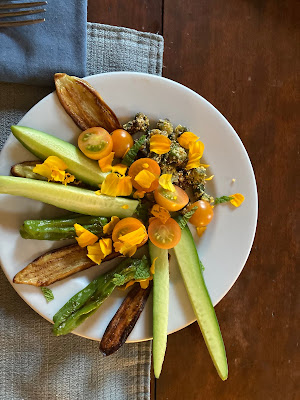 I had a surprise visit yesterday morning from my beloved Harmony friend Donna (who doesn't live there anymore either, but that's where we met, so that's how I think of her). After her visit, and after spending half a week with my Brooklyn beloveds, I'm feeling a little tearful about friendship in general . . . how sweet it can be; how long these friendships have lasted, even over considerable distance; the differences and the odd commonalities. None of my oldest friends are writers, for instance. Whatever we love in one another has little to do with books . . . though my daily private life is crammed with words.