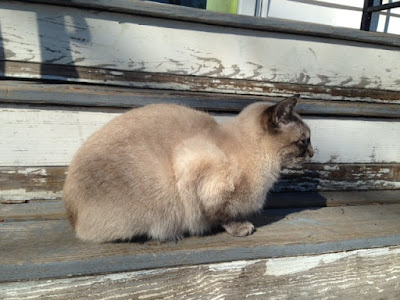 Yesterday was a beauty--blue skies, 50 degrees. Early spring stepped into her glory . . . laundry whipping on the line, neighborhood children shrieking and laughing, walkers stopping by to say hello to my cat and my flowers . . . It was a facsimile of normal, and I was very grateful.

All morning long I worked in the garden. I edged the front flower beds and around the blueberry bushes, and then trundled the cut bits of sod into the backyard, where I used them to fill ruts. I cultivated around emerging bulbs and perennials and weeded out the pushy maple seedlings that are popping up everywhere.

I watched hundreds of honeybees, visitors from a hive up on Stevens Avenue, shimmering among the scylla and crocuses. 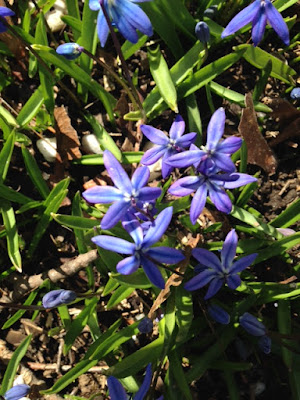 Later in the afternoon, my friend Angela called from up north, where the snow is still masking spring--but she was sitting in her 100-degree greenhouse dreaming of summer, and she'd concocted a method for getting transplants from up there to down here--so I will have tomatoes and peppers after all! The two of us crowed and cheered like we'd just rigged the lottery . . . 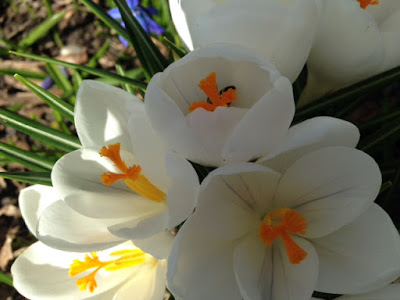 Oh, the power of growing things . . . the brilliant white and gold of these crocuses, and meanwhile gulls squawk and circle up from the bay, mockingbird spouses flip their sharp tails, a neighbor and I dream of hummingbirds in her lilacs, the cat squints in his patch of sun.

I told you about the terrible grocery store/"I hate you" dream I had on Friday night. That same night Tom and Paul also had nightmares. Tom was in the middle of an art opening when he suddenly realized he wasn't supposed to be so close to people, but he couldn't get away from them. Paul was stuck in a dreadful Zoom conference vortex. By daylight we could all laugh ruefully about how the crisis is manipulating us. But the dread is inescapable.

In the face of such terrors, a morning in the garden, a bike ride, a game of cards feel like a kind of exquisite oxygen . . . which is a terrible metaphor, but I can't think of another way to describe my heightened awareness of everyday gestures. A woman walks by with her dog and tells me what a relief it is to see me back outside, working among the plants. And I believe her. I believe that she is deeply relieved. We barely know each other, but that doesn't matter. This is a time when people say such things to strangers.
Posted by Dawn Potter at 6:31 AM

Yesterday I went back to school to drop off some face masks for the food crew, to pick up some student work that had been sent in, and to take a look around my room for anything I might need. As I crossed the state line into Vermont, I was met with a VTrans sign: If you are coming from out of state, self quarantine for 14 days. An eerie "welcome"! It was so weird being back in school -- somehow fear was palpable in those silent halls. Maybe because my last minutes there had been so frantic: to make packets, to gather up my belongings, all with a background of administrative voices saying, "Go, go quickly!" I signed in, signed out, so the custodians can now re-clean the room that I was in for all of 15 minutes. On my way home I saw one of my students out on a skateboard (his first foray outside his house in two weeks) and dropped some books off on another student's porch. He was waiting for me, apparently and popped out his door before I could even get out of my car. It was wonderful to converse face to face, even from six feet away. He has not done any of my assigned work, but has read two books. I'll take it!

Here, fire pits have come into their own. They are wonderful places to gather: you can stand or sit apart from each other but are tied communally, bound by that most ancient of gifts: fire.

I agree about the relief in saying hello to people in person. My neighbor is selling her house, and her adult daughter and grandkids came to play with the toys left behind, before the closing near the end of the month. It was so beautiful--no other word for it--to see the little curly-headed girl toddling about with toys in the sunshine, while her mom and I just chatted for a moment, the hedgerow of forsythia between us. We are, indeed, hardwired to need human contact in person. Our digital age has been thrust into a stark light, I think: keeping in touch virtually cannot possibly do for the human soul what the smile and nuance of an actual conversation can do. That said, keep writing, dear friend. I hear your voice in my head while I read your words. Thank you so much for keeping us all in your world. =)

"I hear your voice in my head while I read your words. Thank you so much for keeping us all in your world." - perfectly said. :) 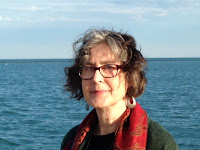