The pets are swirling around their breakfast dishes, it's starting to rain, the Mets lost, the boy fell asleep on the couch, and I woke up so late that I felt like I've been coshed in a dark alley. I blame everything on the time change. How can skipping one little hour do so much?

Also, Scott's The Bride of Lammermoor is wearing me down. So serious! So foreboding! Such irritating romantic leads! I am longing for Shakespeare's rude mechanicals or Dickens's comic traveling actors or Trollope's silly clergymen. Instead, I get "His daughter--his favourite child--his constant playmate--seemed formed live happy in a union with such a commanding spirit as Ravenswood; and even the fine, delicate, fragile form of Lucy Ashton seemed to require the support of the Master's muscular strength and masculine character." Ugh. I hate them all. Why can't Lucy snap out of her "ooh, I'm so helpless; nice man, tell me what to think?" and be more  like Austen's Elizabeth Bennet, striding through the muddy lanes and fields to Netherfield Hall? But no. Apparently, the sign of a true lady is her ability to faint elegantly during a thunderstorm.

On the bright side: During yesterday's game as we were watching Mets relief pitcher Bartolo Colon (short, chunky, old) throw some warmup tosses, I mentioned that I thought he looked like the Frog Footman in Alice in Wonderland. Paul immediately went off on a riff about creating a two-man, Rosencrantz-and-Guildenstern-like show featuring the Frog Footman (starring Colon) and the Fish Footman (starring Steve Buscemi). I can't wait to see it. 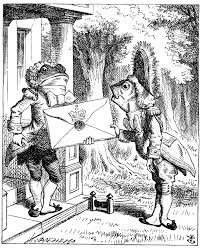 Try watching the opera Lucia di Lammermoor. It has such beautiful music.

I do know the opera, and the music does make up for a beastly plot line.

I figured that you were well versed in that music. For me, it is those cross yourself and pray high notes.