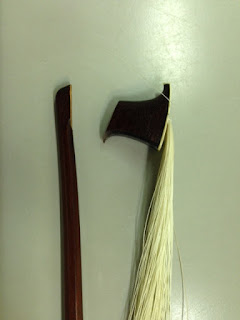 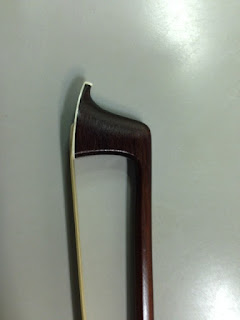 Even under a strong light, the repair is nearly invisible. The bow's action and balance are perfect. I am overflowing with happiness and relief. 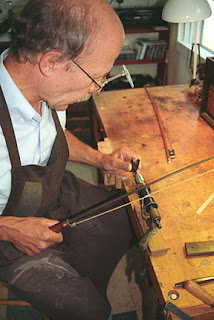 The master who accomplished this feat is D. William Halsey of Schoolcraft, Michigan, not only a restoration specialist but also a renowned bow maker in his own right. According to journalist Max Brooks, "there are probably fewer than 30 bowmakers in the entire country that can boast Halsey’s level of workmanship." Halsey himself has written, 'I think that so much character, once evident throughout this art, is sometimes lost to the pursuit of perfection over excellence. . . . One is attainable, one is not. . . . The greatest French makers whom I know didn’t spend much time grasping a caliper.” Though, as Brooks notes, Halsey "does use gauges and calipers as guides in his own bowmaking, . . .  he is a believer in what he calls 'the workmanship of risk,' in working by hand and trusting the eye over the ruler." He told Brooks, "It's not only fashioning a piece of art, it has to work too. That's where the challenge lies."

The workmanship of risk. Oh, poets, this is our story too.
Posted by Dawn Potter at 8:06 AM